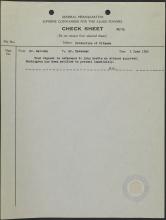 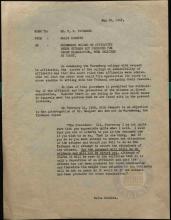 Contributors:
Frank Stacy Tavenner
Solis Horwitz
Description:
Horwitz alerts Tavenner to a potential solution to the problem they currently have by looking at the Nuremberg Tribunal's ruling that "affidavits were admissible but that the other side could file application for leave to cross examine in writing with the Tribunal assigning their reasons." Furthermore, the Tribunal "permitted the withholding of the affidavit and the production of the witness on direct examination." Horwitz excerpts the interrogation of Dr. Wengler, who was not at Nuremberg, as a case that would help the Prosecution's present problem.
Date:
1947CE May 28th
Subject:
Witnesses 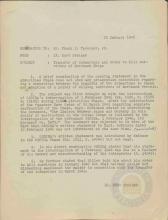 Contributors:
Kurt L. Steiner
Frank Stacy Tavenner
Description:
States that in the opening statement of the Atrocities Phase, no connection was made between the transfer of two submarines to Japan and the adoption of a policy of killing survivors of merchant vessels. Steiner then outlines how the subject was introduced during OSHIMA's interrogation on 1 February 1946, that OSHIMA later said he had "a failure of memory and misunderstanding of the interpreter" during the February interrogation, and finally, that "Hitler told him about his order to kill survivors in January 1942 but that neither Hitler nor Ribbentrop mentioned the matter in connection with the transfer of the submarines in March 1943."
Date:
1948CE Jan 22nd
Subject:
Witnesses 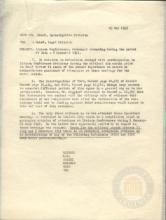 Contributors:
Yale C. Maxon
Edward P. Monaghan
Frank Stacy Tavenner
Description:
Maxon discusses the need to have definitive proof who was in attendance at the meetings of the Liaison Conference decisions in the six months leading up to Pearl Harbor. To that end, Maxon cites the interrogations, exhibits, and witnesses that have or might have information as to attendance.
Date:
1947CE May 23rd
Subject:
Witnesses 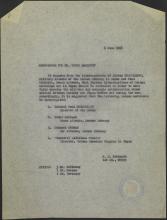 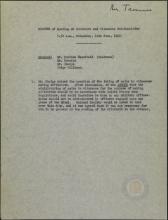 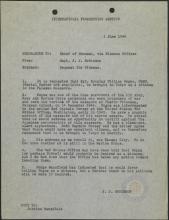