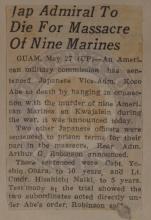 Description:
Reports on the "death by hanging" sentence given to Japanese Vice-Admiral Koso Abe "in connection with the murder of nine American Marines on Kwajalein during the war." Also announces the sentences given to Capt. Yoshio Obara and Lt. Cmdr. Hisahichi Naiki.
Subject:
Punishment / Sentencing
Defendants - Charges Against
Press - Post-War

Description:
Reports on the charges brought against Prince Norimasa Nashimoto, aged 71, who "described himself as a field marshal without a command, a prince without influence, and a Shinto ritualist with little to do." He was the "first member of the Japanese imperial household named as a suspected war criminal." Also reports on the response of Ryochi Sasakawa, former president of the Kokusai Domei political association, upon hearing that he was named as a war criminal.
Subject:
Press - Post-War
Defendants - Charges Against

Description:
Reports on the New York Herald Tribune's editorial regarding the validity of the IMTFE and Tojo's assertion that the tribunal did not have the proper jurisdiction. Also indicates that the effect of the trial on the Chinese and other Asians "should be good."
Subject:
Press - Response to Trial
Defendants - Charges Against
Testimony
Japanese-Chinese Relations 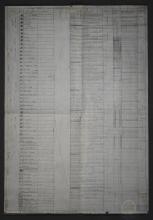 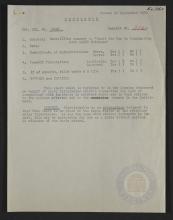 Description:
Defense document number 2242, exhibit number 3160, summary and comment sheet for "Uncertified summary - 'Chart for Use in Conjunction with ARAKI Evidence.'" Summary states "This chart which is referred to in the Opening Statement on behalf of ARAKI illustrates ARAKI's connection (or lack of connection) with incidents in evidence which are in turn related to the nations affected and to the counts in the Indictment. Comment: Objectionable as an evidentiary document in that this chart is no proof of the facts stated or the relationships illustrated. As was the case with similar documents in the past, this may be acceptable for use as a guide without serving as evidence of the facts stated."
Date:
1946CE Sep 10th
Subject:
Defense Documents
Evidence
Analysis of Documents
Defendants - Charges Against

Description:
Series of news wire pieces that report on Joseph B. Keenan's plan to establish a specific test for Yosuke Matsuoka in order to determine his health fitness to stand trial, the psychiatric examination of Dr. Shumei Okawa, and the order for arrests to be made of Lieutenant Generals Yuichiro Nagano and Fusataro Toshima with subsequent imprisonment in Sugamo.
Subject:
Defendants - Charges Against
Press - Post-War
Press - Response to Trial
Trial Progress 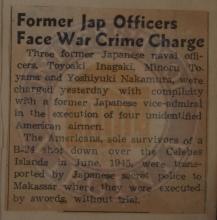 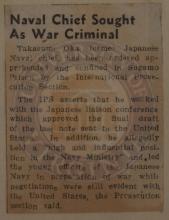 Description:
Reports that the IPS believes that Takasumi Oka, former Japanese Naval chief, "worked with the Japanese liaison conference which approved the final draft of the last note sent to the United States" and should therefore be apprehended and confined in Sugamo prison.
Subject:
Defendants - Charges Against
Japanese Military
Pearl Harbor
Press - Post-War

Contributors:
Kōki Hirota
H. K. Hedayat
Description:
Letter from the Persian Minister, H. K. Hedayat, to the Japanese Minister for Foreign Affairs, Koki Hirota, regarding the "bombardment of the house and pillage of the property of Mr. A. R. Afshar, a Persian merchant residing in Shanghai. Gives details regarding the incident.
Date:
1934CE Feb 22nd
Subject:
Defendants - Charges Against
Japanese-Chinese Relations
Atrocities
Evidence

Description:
Official headshots of the accused Japanese defendants taken by the International Prosecution Section Photo Section for the International Military Tribunal for the Far East. Twenty-six of the twenty-28 accused are pictured. Missing are: Matsuoka and Okawa.
Subject:
Defendants - Charges Against
Photograph