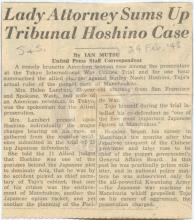 Contributors:
Ian Yōnosuke Mutsu
Description:
Lady Attorney Sums Up Tribunal Hoshino Case By Ian Mutsu United Press Staff Correspondent A comely brunette American woman rose among the prosecutors at the Tokyo International War Crimes Trial and for one hour summarized the allied charges against burley Naoki Hoshino, Tojo’s actual rule of the puppet state of Manchoukuo. Mrs. Helen Lambert, 33-year-old attorney from San Francisco and Spokane, Wash., and wife of an American newsman in Tokyo, was the spokesman for the Allied prosecution. Mrs. Lambert pressed upon Hoshino individually the major charges bearing on his case, as gathered from the massive evidence submitted in the trial of 25 top Japanese defendants. She told the 11 Allied judges that Hoshino was one of the geniuses behind the Japanese plot to dominate Asia, that he was by no accident picked as chief secretary of Tojo’s cabinet, that one of his crimes was the enslavement of Manchukuo, another the Japanese opium racket, and yet another the planning of the Pacific War. Tojo himself during the trial labelled his co-defendant as "one of the five most important Japanese figures in Manchukuo." Hoshino began his career in Manchuria ten months after the Japanese conquest of the Chinese provinces and later rose to be chief of the puppet government's General Affairs Board. In this post he was practically prime minister, and in national policy matters he was subservient only to the all-powerful Kwantung Army - the Japanese war machine in Manchuria which propelled Tojo on his career of aggression, the prosecution charged.
Date:
1948CE Feb 24th
Subject:
Women's Involvement