Contributors:
Frank Stacy Tavenner
Description:
Tavenner gives the final summation in the Prosecution's case against the Japanese defendants. Some quotes include: "They planned to extend their domination and control to the areas.... French Indo China by force (through military) exploit Netherlands east Indies and then took by force, threatened the United States, and go to war with. These defendants were not mere automatons, they were not replaceable cogwheels in a machine, they were not playthings of fate caught in a maelstrom of destiny from which there was no extrication. These men were the brains of a empire they were the leaders of the nations destiny . . . .become a symbol of evil throughout the world. They made their choice, for this choice they must bear the guilt, [compares to the defendants at Nuremberg saying they were not the dregs of society and the underworld like those people were] these people were supposed to be the elite of the nation, honest and trustworthy. They voluntarily elected to follow the path of war. At the end of the "tribunal reserves its judgment and adjourns . . ." Upon conclusion, Sir William Webb dismisses the court until judgment has been decided. Shows judges, lawyers, defendants and audience leaving the courtroom.
Subject:
Summation 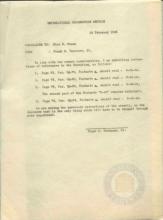 Contributors:
Frank Stacy Tavenner
Dinah Braun
Description:
Tavenner submits to Miss Braun "corrections of references to the Summations." Lists the page, paragraph, and footnote information of the mistake along with the correction. He states that "we are making the necessary corrections of the stencil, so the Japanese text is the only thing which will have to be changed through your department."
Date:
1948CE Feb 10th
Subject:
Summation 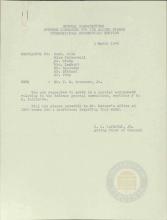