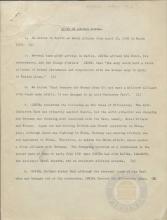 Description:
Gives Admiral KOJIMA's actions and knowledge regarding interaction between Japan and Germany in reference to the Anti-Comintern Pact against Russia. Mainly discusses KOJIMA's interaction with OSHIMA and OSHIMA's thoughts. Mentions INOYE, OSHIMA, Ribbentrop, KOJIMA, YAMAMOTO, TATSUMI, SHIRATORI and ITO. The notes offer insight into the interpersonal relationships between the people mentioned, how different sides viewed the military alliance between Germany and Japan, who expressed specific opinions on potential alliances at a conference in the summer of 1938, and how OSHIMA was not trusted by the army while ITO met with great opposition from OSHIMA and SHIRATORI.
Date:
1946CE
Subject:
Japanese-German Relations 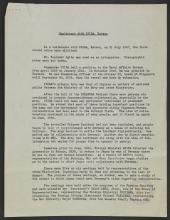 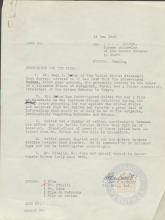 Contributors:
B. Edwin Sackett
Erich Boltze
John W. Fihelly
Otto Lowe
Description:
Indicates that Paul A. Boran interrogated Boltze "who has a file of documents on the Japanese-German relations during the several years preceding the war against the United States." Says there will be further interrogation by Mr. Fihelly, Mr. Lowe and Mr. Sackett and that Boltze "is somewhat of an informer type and can be interrogated accordingly."
Date:
1945CE Dec 14th
Subject:
Japanese-German Relations 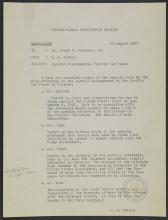