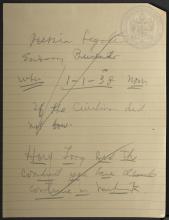 Contributors:
David Nelson Sutton
Description:
Appears to be questions that have been asked an answered, including one that states "how long did the conduct you have described continue in [unclear word]."
Subject:
Background Information 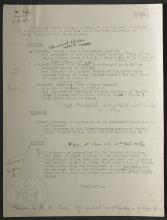 Contributors:
James M. McEwen
Description:
List for Sutton of possible Japanese officials to investigate as possible leads while he is in China. States "They may well be dead ends." Concludes with "Good Hunting." Handwritten notations next to names are included.
Date:
1946CE Mar 8th
Subject:
Background Information 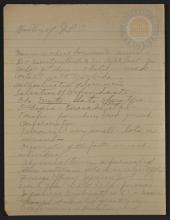 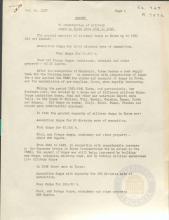 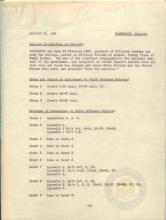 Contributors:
Gilbert S. Woolworth
Description:
Document that gives an overview of the case against HASHIMOTO. Focuses on his actions as a "propagandist for military control of the government" and his nationalistic actions through societies and positions such as Military Attache at Ankara, Turkey. Gives a general description of HASHIMOTO, the "group and counts of indictment to which evidence relates," "sections of appendices to which evidence relates," "general statement of ultimate facts believed to be established by evidence," "specific statement of each fact sought to be proved, followed by specific detailed statement of exact evidence by which it is to be proved," "other evidence available but not used," "other evidence desired but not available." Mentions the Ladybird incident, conspiracy regarding the Manchurian incident, societies that promoted aggressive warfare (such as Sakura Kai - Cherry Blossom Society, Dai Nippon Seinento and Dai Nippon Sekisei-Kai), People mentioned include: HASHIMOTO, CHO, OKAWA, KOISO, NINOMITA, UGAKI, TATEKAWA, SUGIYAMA.
Date:
1946CE Mar
Subject:
Background Information 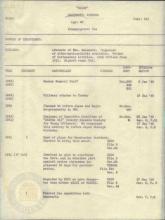 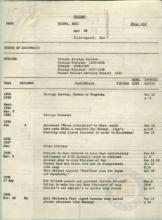 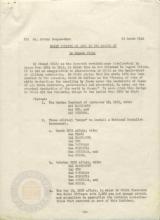 Contributors:
Hugh Barnett Helm
Arthur Strettell Comyns Carr
Description:
Gives a detailed description of Dr. Shumei OKAWA's actions prior to and during the war that form the basis for the war crimes charges against him. Discusses OKAWA's role in the Mukden incident, his educational and professional associations, and his theories on and promulgation of Pan Asianism.
Date:
1946CE Mar 15th
Subject:
Background Information 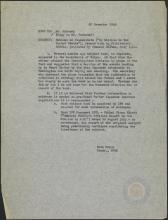 Contributors:
Willis E. Mahoney
Yale C. Maxon
Frank Stacy Tavenner
Description:
Alerts Mahoney that a book published several months ago in Japanese regarding pre-Pearl Harbor Japanese American negotiations should be acquired and scanned. In addition, a report from 1942 on the same subject should be rescanned because original analysis was not enough for such an important subject.
Date:
1946CE Dec 26th
Subject:
Background Information