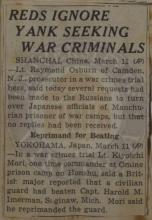 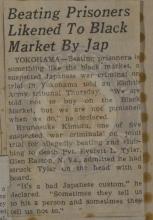 Description:
Reports the acquittal of Shunsuke Kato at the Yokohama trial held by the Eighth Army Military Commission. It was the first acquittal by this group. Gives details regarding the case against Kato who had been "accused of assisting Cpl. Naraichi Chihara to beat prisoners." Kato's defense included assertions that he was only following direct orders from his supervisor. Also reports on the sentencing of Pvt. Truo Ono and Cpl. Motoichi Sakagami.
Subject:
Prisoners of War (POWs)
Press - Post-War
Punishment / Sentencing
Defendants - Charges Against

Description:
Reports on the upcoming trial of Capt. Yuhichi Sakachi Sakamoto (a Japanese prison commandant) in front of the Eighth Army military commission in Yokohama. He was charged with ordering prisoner's of war to celebrate President Roosevelt's death. Col. Oliver E. Trechter was scheduled to serve as the judge. Another news wire piece reports on the progress of Capt. Isao Fukuhara's trial.
Subject:
Defendants - Charges Against
Press - Post-War
Prisoners of War (POWs) 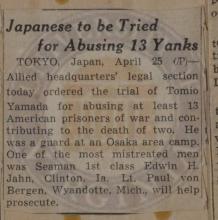 Description:
Reports on the trial of Tomio Yamada who was accused of "abusing at least 13 American prisoners of war and contributing to the death of two" while he was a guard at an Osaka area camp. Indicates that one of the abused men was Seaman 1st class Edwin H. Jahn and that Lt. Paul von Bergen of Wyandotte, Michigan will help prosecute.
Subject:
Press - Post-War
Prisoners of War (POWs)
Defendants - Charges Against

Description:
Reports on the trial of Lieut. Miyoroku Okada in Yokohama for his actions as commandant of the Nagoya prisoner of war camp. Includes information from the affidavits of 23 fellow prisoners who described the beating and subsequent burial of Aviation Ordnanceman Doyle W. Waggoner of Shreveport, Louisiana. Another news wire items report on the not guilty pleas offered by Nobuo Kanayama, Tsuyoshi Sadai and Kiyoichi Mori at the Eighth Army commission Yokohama trial, the charges against Tsutomu Shiba (former captain and medical officer in the Japanese army) in Tokyo, and the release of thirteen Japanese accused war criminals from Sugamo prison after they were acquitted of "charges of maltreating Allied war prisoners."
Subject:
Defendants - Charges Against
Testimony
Press - Post-War
Press - Response to Trial
Prisoners of War (POWs)

Description:
Reports on the sentencing of death by hanging of Capt. Kaichi Hirate, "Japanese prisoner of war camp commandant, guilty of brutal atrocities against Allied prisoners." Relates the arguments used by the prosecution and the defense during the trial that took place at Yokohama.
Subject:
Atrocities
Press - Post-War
Punishment / Sentencing
Prisoners of War (POWs) 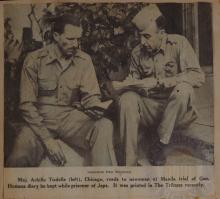 Description:
Photograph with caption "Maj. Achille Tisdell (left), Chicago, reads to newsman at Manila trial of Gen. Homma diary he kept while prisoner of Japs. It was printed in The Tribune recently.
Subject:
Press - Post-War
Prisoners of War (POWs)