Contributors:
Russell Brines
Description:
Reports on how HATAYOMA was denied the premiership by SCAP because of his "career as secretary on the notorious Tanaka Cabinet from 1927 to 1929" as well as his ultra-nationalistic speeches and writings. Indicates that Hatayoma may be tried as a war criminal and that "SCAP says he shares blame for formulating peace preservation law."
Date:
1946CE May 9th
Subject:
Press - Post-War
Press - Response to Trial
Japanese Nationalism / Nationalistic Societies 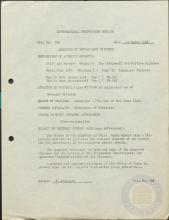 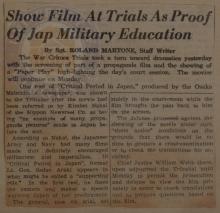 Contributors:
Americo Parades
Description:
Reports on the testimony given by "Prof. Hyoe Oichi of the Imperial University of Tokyo" who stated that "one of the purposes of military training in Japanese schools was the domination of the world." Oichi spent 11 months in custody which the defense tried to prove was a result of Communist activities. Oichi offered a picture of how professors were supposed to teach Japanese students, including the fact that "the idea of world domination was 'woven into Japanese education." Also testifying was Prof. Yukitaki Takikawa of Kyoto University.
Subject:
Testimony
Press - Response to Trial
Japanese Nationalism / Nationalistic Societies
Japanese Military 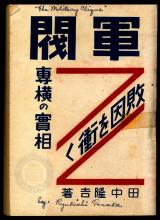 Contributors:
Ryūkichi Tanaka
Description:
敗因を衝く : 軍閥専横の実相 / Haiin o tsuku : Gunbatsu sen'ō no jissō. This is Ryūkichi Tanaka's thoughts on Japan's defeat. Tanaka served in various military positions throughout Japan's aggression in Manchuria and World War II. He served as an important witness during the Tokyo War Crimes Trial. The publication is entirely in Japanese and was published in 1946 (Showa 21) by Sansuisha. The cover page has a dedication to "Mr. Capt. Phelp, 1946, 22, Feb, ā Tokyo" from Tanaka (possibly Ryukichi Tanaka and not another individual). Only the front cover, spine, cover page with signature, and back cover have been digitized and presented on this digital archive due to copyright restrictions.
Date:
1946CE Feb 22nd
Subject:
Evidence
Background Information
Japanese Military
Japanese Nationalism / Nationalistic Societies 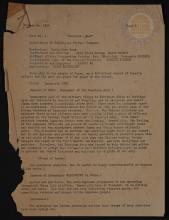 Description:
Transcripts and summaries related to Japanese propaganda films "Glorious Japan" found on 3 reels (and divided into four parts). "Glorious Japan" was "dedicated to the people of Japan, as a historical record of Japan's efforts for the past two years for peace in the Orient." Lists the individuals involved in its production.
Subject:
Japanese Nationalism / Nationalistic Societies
Propaganda
Japanese-Chinese Relations
Japanese Aggression in Manchuria