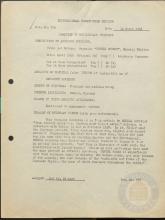 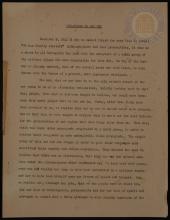 Contributors:
Takako Nagayo
Description:
Speech given by Takako NAGAYO on December 20, 1945 regarding December 8, 1941 (the attack on Pearl Harbor), the entry into an all out war, and the propaganda that led to such circumstances. It is critical of the Japanese government's actions and it outlines the military's actions throughout the war. Closes by mentioning the atomic bomb and the "declaration of war from Russia."
Date:
1945CE Dec 20th
Subject:
Conspiracy
Propaganda
Japanese Military
Pearl Harbor
Japanese-Soviet Relations 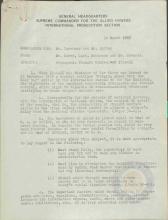 Contributors:
Pedro Lopez
James J. Robinson
William E. Edwards
Frank Stacy Tavenner
David Nelson Sutton
Description:
Gives highlights from a November 15, 1938 booklet ITAGAKI issued while he was Minister of War titled "Forging Ahead with the Holy War." These excerpts on propaganda and thought control are submitted with suggestions on how to use them in cross-examination.
Date:
1947CE Mar 24th
Subject:
Propaganda