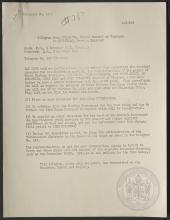 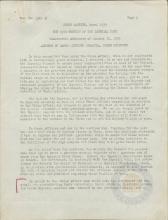 Contributors:
Kiichirō Hiranuma
Description:
Document reproduces Prime Minister Baron Kiichiro Hiranuma's ministerial address to the 74th Session of the Imperial Diet as published in the Tokyo Gazette. Hiranuma discusses relations with China and Manchoukuo, the threat of communism, military actions and economic situation. Constantly references the needs of the Imperial Throne, the Emperor and the Empire. [Note: Date field reflects the original date of publication and not the date the IPS created this document for introduction into evidence.]
Date:
1939CE Mar
Subject:
Japanese Aggression in Manchuria 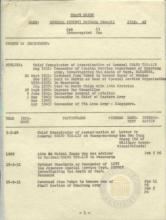 Description:
Gives basic background information regarding General Kenji DOIHARA including his age and the fact that he has been interrogated. The counts of indictment field is empty, but the outline states his actions and whereabouts from August 1931 to April 1945 noting that he was the Chief Conspirator of Assassination of General CHANG TSO-LIN. After the outline section, more in-depth information is given the specific dates of incidents, including potential witnesses, sources for data or supporting interrogation.
Subject:
Japanese Aggression in Manchuria 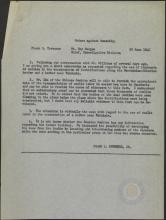 Contributors:
Frank Stacy Tavenner
Roy L. Morgan
Description:
Discusses evidence "regarding the use of thousands of coolies in the construction of fortifications along the Manchukian-Siberian border and a harber near Teintsin."
Date:
1946CE Jun 19th
Subject:
Japanese Aggression in Manchuria 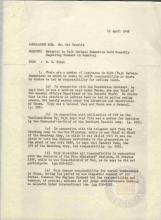 Contributors:
Solis Horwitz
Rowland Wells Fixel
Description:
Fixel informs Horwitz of the numerous instances in the Tojo Defense Summation where Tojo attempts to "shift responsibility or where he claims he has no responsibility for actions taken." Fixel gives summaries of these instances, referencing topics such as the Manchurian Incident, utilization of POW on the Thailand-Burma Ry, telegram sent from Kwantung Army to the War Ministry on assistance from China in event of war with USSR, decision of the Five Ministers' decision, aerial bombardment in China, fall of the Yonai Cabinet, attack on Pearl Harbor as a crime under international law, the propriety of the trials. Fixel then addresses the Defense attempts to emphasize the notion that Japan was engaged in a war of self defense. He references decisions by the Supreme Court on this matter, ultimately concluding "Unless a similar rule prevails where a nation is vested with power to declare it is required to war in self defense, what recourse would a weak nation have against a powerful aggressor, who, after conquering the weaker nation, merely asserted its notion was in self defense. To test the validity of its claim a court such as IMTFE only determines whether the claim asserted is bona fide, and not a fraudulent or arbitrary exercise of power under the cloak of self defense."
Date:
1948CE Apr 13th
Subject:
Japanese Aggression in Manchuria