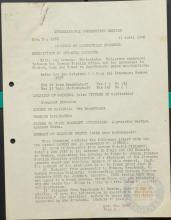 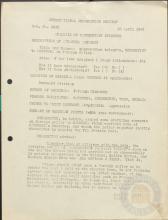 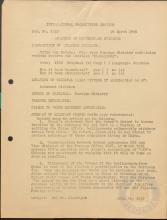 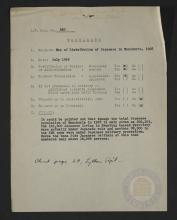 Description:
Defense document number 260 - Map of Distribution of Japanese in Manchuria, 1928 exhibit description. For use in the Manchurian phase. Notation at the top of the page states "withdrawn - to be introduced later." Bottom part of the page has a handwritten note: "Check page 29, Lytton Rep't." Summary of document states: "It could be pointed out that though the total Japanese population of Manchuria in 1928 is only given as 206,203, the 101,000 Japanese living in Kwantung Leased Territory were actually under Japanese rule and another 88,000 in the SMR zone were under Japanese military protection. Hence the bona fide Japanese settlers at this time numbered only about 16,000 persons."
Subject:
Defense Documents
Japanese-Chinese Relations
Japanese Aggression in Manchuria
Analysis of Documents 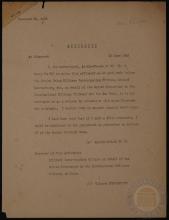 Description:
Reports on the testimony given by Major-General Ryukichi Tanaka where he asserted that Col. Kuwamoto was "directly responsible for the assassination of Marshal Chang Tso-lin." He also accused Kingoro Hashimoto, Seishiro Itagaki, and Okawa Shumei (along with three others) as "having been elements backing the occupation of Manchuria." Tanaka was questioned by Edwin B. Sackett. Further testimony given by Tanaka discusses the military actions and occupation of Manchuria. Other evidence entered during the day's proceedings included Kingoro Hashimoto's book "The Road to World Reconstruction."
Subject:
Testimony
Press - Response to Trial
Japanese Military
Japanese Aggression in Manchuria
Defendants - Charges Against

Description:
Reports on the testimony given by Henry Pu Yi, former puppet ruler of Manchuria. While he testified that "Japan made opium addicts of Manchurians to keep down revolt and was planning an invasion of Soviet Russia," Pu Yi subsequently had trouble remembering events when he was cross-examined by defense counsel. Gives details on the questions asked and Pu Yi's responses. The article concludes by stating "Pu Yi is in Soviet custody, and is expected to be returned to Moscow after his testimony is concluded."
Subject:
Press - Response to Trial
Testimony
Japanese Aggression in Manchuria
Japanese-Soviet Relations
Narcotics / Opium