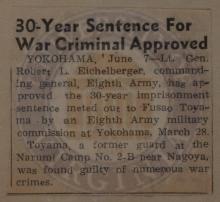 Description:
Reports on the sentencing of Fusao Toyama by the Eighth Army military commission at Yokohama under the direction of Robert L. Eichelberger. Toyama was sentenced to 30 years for his actions at Narumi Camp No. 2-B near Nagoya.
Subject:
Press - Post-War
Punishment / Sentencing 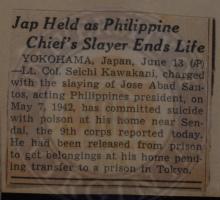 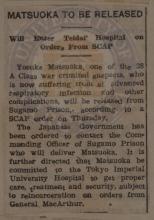 Description:
Reports that Yosuke Matsuoka will be released from Sugamo Prison and transferred to Tokyo Imperial University Hospital as a result of his "respiratory infection and other complications."
Subject:
Trial Progress
Press - Post-War 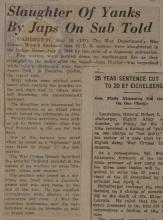 Description:
Reports on the atrocity committed by the crew of a Japanese submarine on July 2, 1944 as disclosed by the War Department's War Crimes Branch. Seventy-six U. S. seamen "were slaughtered" according to the report. The article closes with the fact that one of the seaman escaped by posing as a diplomat and that "he has supplied investigators with identity of the submarine and crew. A War Department spokesman said the perpetrators would be brought to trial in Japan soon."
Subject:
Atrocities
Evidence
Press - Post-War