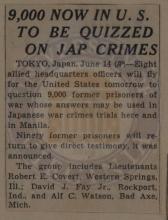 Description:
Reports that roughly 9,000 former prisoners of war will be interviewed for testimony to use in the Tokyo and Manila war crimes trials. In addition, "ninety former prisoners will return to give direct testimony."
Subject:
Prisoners of War (POWs)
Witnesses
Press - Response to Trial

Description:
Reports on the statement by Col. Guy H. Stubbs, "a survivor of the Death March of Bataan and 41 months in Japanese prison camps" that former prisoners of war should testify at the war crimes trials in order to help convict the accused Japanese defendants.
Subject:
Press - Response to Trial
Prisoners of War (POWs)
Witnesses

Description:
Goes into great detail on the witness testimony from Dr. Robert O. Wilson, a former Nanking surgeon, regarding the 'Rape of Nanking' and subsequent occupation of the area by the Japanese military. Graphic descriptions of atrocities perpetrated on women as well as the recounting of mass executions that Wilson witnessed.
Subject:
Atrocities
Japanese-Chinese Relations
Witnesses
Testimony
Japanese Military

Description:
Reports that Maj. A. C. Tisdelle, former aide de camp of Maj. Gen. Edward P. King, will return to Manila in order to testify in Gen. Homma's trial. He was present at the surrender ceremony at Bataan.
Subject:
Witnesses
Press - Post-War

Description:
Reports that Japanese General Yoshijiro Umezu has requested five witnesses to testify on his behalf before the tribunal (three of whom are believed to be held by the Russians). They include: Japanese Lt. Gen. Hikozaburo Hata, Maj. Gen. Tomokatsu Matsumura, Lt. Gen. Shojiro Iida, Maj. Gen. Moichiro Yamamoto, and Lt. Gen. Yukio Kasahara. According to the article, "the defense plans to use these five witnesses to prove that Umezu, in his post as Commander-in-Chief of the Kwantung Army and in other offices, took no part in any of the conspiracies alleged in the indictment, and was not responsible for the planning, initiating or waging of wars of aggression." Brief section at the end of the article reports that Joseph B. Keenan expects to leave Washington, D. C. on July 16 for Tokyo.
Subject:
Witnesses 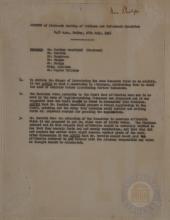 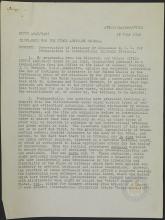 Contributors:
Archibald Kind
Description:
Investigates legal premise and guidelines "for the use of testimony by witnesses in the United States in the forthcoming trial of war criminals by the proposed international tribunal."
Date:
1945CE Jun 18th
Subject:
Witnesses