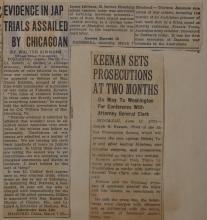 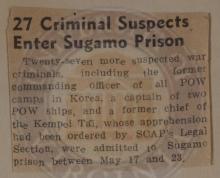 Description:
Reports on the admittance of twenty-seven more suspected war criminals to Sugamo prison between May 17 and 23. Lists some of the crimes they are charged with committing.
Subject:
Press - Post-War 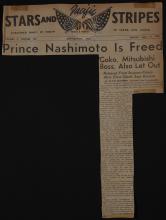 Contributors:
Duane Hennessy
Description:
Reports on the release of Field Marshal Prince Morimasa Nashimoto (the only member of the Imperial family to be imprisoned as a war criminal at Sugamo prison) as well as the release of Kiyoshi Goko.
Date:
1946CE Apr 14th
Subject:
Defendants - Charges Against
Press - Post-War

Description:
Reports on the 50-year sentenced given to Lt. Miyoroku Okada ("former Nagoya prisoner of war camp commandant") by the Eighth Army commission in Yokohama. Lists the charges against him. Also states that Lt. Takeharu Hirata (former Fukuoka camp commander) will go on trial on Wednesday and that Lt. James A. Miner "was named to prosecute three Japanese officers who will be tried at Manila for war crimes in the Philippines).
Subject:
Defendants - Charges Against
Press - Post-War
Punishment / Sentencing
Prisoners of War (POWs) 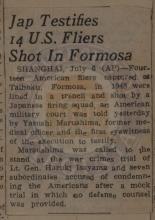 Description:
Reports on the testimony of Yasushi Marushima during the war crimes trial for Lt. Gen. Haruki Isayama in Shanghai. He described the capture of fourteen American fliers at Taihoku, Formosa in 1945.
Subject:
Defendants - Charges Against
Press - Post-War
Testimony

Contributors:
Roland A. Martone
Earnest Hoberecht
Description:
Discusses a report from Sadaichi Yoshimoto (former chief of staff of Japan's Central China Expeditionary Army) to Masataka Yamazaki (minister of war in 1939) that "advocated the blockading of the Yangtze River to 'drive out British influence.'" The report further argued for the use of force to stop Great Britain from aiding Chiang Kai-shek. Other brief news wire service reports discuss the trial of Toshio Takeshita in Yokohama, the "inadequacy" of sentences in Yokohama according to Lt. Gen. Robert L. Eichelberger, and the fact that "Germany urged Japan to start war in 1941" according to Hiroshi Oshima when he relayed his discussions with German Foreign Minister Ribbentrop.
Subject:
Japanese-Chinese Relations
Punishment / Sentencing
Press - Post-War
Press - Response to Trial
Japanese-German Relations 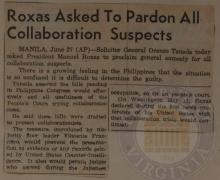 Description:
Reports on the request by solicitor general Orenzo Tanada to President Manuel Roxas for a "general amnesty for all collaboration suspects." Gives an overview of the confusion surrounding who might or might not be guilty.
Subject:
Press - Post-War
Punishment / Sentencing