Description:
Reports on the United States Supreme Court decision that the trial of Lt. Gen. Tomoyuki Yamashita was legal. Gives the details of the courts decision as well as the charges Yamashita was tried for in Manila. Other news wire pieces include: "Keenan Sees Baking in Court Action: Ruling on Yamashita 'Helpful,' Says Chief of Prosecution Staff" and "British Prosecution Staff Arrives in Tokyo."
Subject:
Press - Post-War
Press - Response to Trial
Punishment / Sentencing
Trial Progress 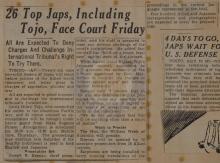 Description:
Reports that the 26 Japanese defendants at the IMTFE would enter their pleas on Friday and were "expected to plead innocent and to challenge the international tribunal's jurisdiction." Outlines the procedure for travel from Sugamo prison to the War Ministry building for the tribunal, Keenan's planned response to the defense's challenge regarding the validity of the trial, and the general set-up of the courtroom.
Subject:
Defendants - Charges Against
Trial Procedure
Trial Progress
Press - Response to Trial

Description:
Reports on the potential defense move to challenge the validity of the Tokyo tribunal's jurisdiction and it's legality after Sir William Webb indicated that that line of reasoning would be permitted. Also relates continued outbursts in court by defendant Shumei Okawa as well as the reading of the full indictment and subsequent adjournment.
Subject:
Trial Procedure
Trial Progress
Validity of Tribunal
Press - Response to Trial

Description:
Reports on the transport of the 26 Japanese accused war criminals from Sugamo prison to the International Military Tribunal for the Far East held at the war ministry building. Describes the security precautions taken, the dress of the defendants and 8th army military police, and the opening of the tribunal.
Subject:
Press - Response to Trial
Trial Progress 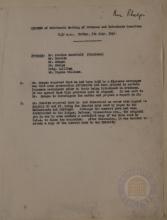 Description:
Reports on statement by Joseph B. Keenan that predicted the prosecution of Hideki Tojo and the other accused Japanese war criminals would take two months. Keenan also stated that the Japanese public were "apathetic toward the trials."
Subject:
Press - Response to Trial
Trial Progress

Contributors:
Russell Brines
Description:
Reports on the statements of Commander Bentley M. McMullin (an investigator and case lawyer on the prosecution staff) who stated that the "Allied prosecution of Japan's accused war makers had 'fallen victim to maladministration, neglect and inefficiency which in view of the issues at stake is tragic.'" The article then explores the problems with the tribunal and the way the Japanese citizens responded to the proceedings.
Subject:
Press - Response to Trial
Trial Preparation / Structure
Trial Progress

Description:
Reports on the statements of defense attorney Major Bruce Blakeney who asserted that "America's atom bombing of Hiroshima was no less murderous than Japan's attack on Pearl Harbor." Chief Prosecutor Joseph B. Keenan offered a quick rebuttal stating "we make no apologies for the use of the atomic bomb against Japan." He further argued, regarding the validity of the Tribunal, that "the lack of precedent . . . should not be used as an escape hatch for the guilty." The article also discusses the motion submitted by W. G. Furness to have four of the accused military generals tried by court martial rather than an international tribunal.
Subject:
Press - Response to Trial
Trial Progress
Validity of Tribunal
Precedents (International Law)
Defendants - Charges Against