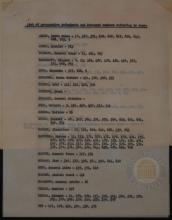 Description:
A list of possible Japanese defendants with the numbers of documents pertaining to the accused individual. The final entry states "In addition to the above list, the following document numbers refer to Okawa, Shumei, a possible defendant."
Subject:
Defendants - Charges Against
IPS Document Processing
IPS Clerical Information
Trial Preparation / Structure 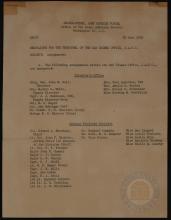 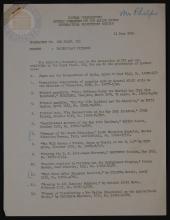 Contributors:
Roy L. Morgan
Description:
List of documents "in the possession of CIS" and "available to the Legal Staff, IPS, for us in the prosecution of instant case." Lists the title of the document, relevant date, length of document, and assigned number.
Date:
1946CE Jun 11th
Subject:
Evidence
IPS Document Processing
Trial Preparation / Structure
Background Information 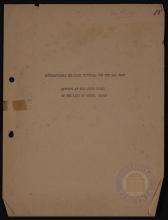 Description:
Official record / transcript of the IMTFE court proceedings from the opening day (April 29, 1946) until June 5, 1946. The first fourteen pages contain the background of international agreements, the formal establishment proclamation of the International Military Tribunal for the Far East (including the policies and powers of the court), the names of all individuals involved in the proceedings, and the charges against the accused Japanese defendants.
Date:
1946CE
Subject:
Precedents (International Law)
Validity of Tribunal
Trial Progress
Trial Preparation / Structure
Background Information