Description:
Indictment against Tojo, Togo, and other Japanese war criminal defendants. The beginning contains a general summary of Items 1 - 12 before including the "summaries" brought against the defendants.
Date:
1946CE
Subject:
Defendants - Charges Against 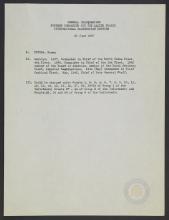 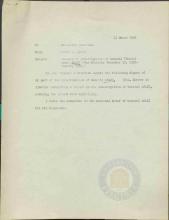 Contributors:
Elton M. Hyder
Description:
Elton Hyder submits his part of General ARAKI's interrogation. Indicates that Col. Morrow is also submitting a report on his interrogation of ARAKI covering 1936 - 1939). Topics covered include: Planning the occupation of Manchuria, the Government of Manchuria, Recognition of Manchuria as Independent, the Shanghai Incident, and the withdrawal of Japan from the League of Nations. Ultimately, Hyder submits his opinion that ARAKI would not make a good witness because he does not name other responsible persons for events and decisions. On the other hand, ARAKI should be included as a defendant "because he conceived suggested and crystallized a governmental policy resulting in the occupation and completion of occupation of Manchuria during his tenure as War Minister."
Date:
1946CE Mar 11th
Subject:
Defendants - Charges Against 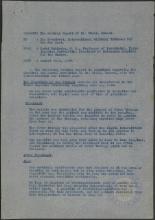 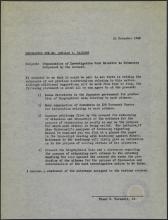 Contributors:
Douglas L. Waldorf
Frank Stacy Tavenner
Description:
Lists the points that the IPS can agree on at the present time. These include the issuance of directives to the Japanese government for biographical data relating to each witness, examination of documents in IPS Document Center, examination of petitions filed by the accused, and the presentation of biographical data and a statement regarding the purpose of subpoenaing each witness.
Date:
1946CE Dec 23rd
Subject:
Defendants - Charges Against

Description:
Newspaper clipping from September 1, 1947 regarding the release of 15 war crimes suspects from Sugamo Prison. Newspaper published in not indicated but comes from the Associated Press wire service.
Date:
1947CE Sep 1st
Subject:
Defendants - Charges Against 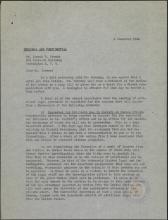 Contributors:
Joseph Berry Keenan
Frank Stacy Tavenner
Willis E. Mahoney
Description:
Requests additional legal personnel from the United States to help out the legal staff. Indicates that representatives for the accused in Sugamo Prison are demanding their clients be released if they are not going to be prosecuted. Also states that Tavenner has had Major Pedro Lopez remove the most objectionable parts of his opening statement for the trial. Points out possible problems the prosecution may encounter in their presentation of the case because the Tribunal indicated that they disliked the length of evidence being proposed and therefore it may be truncated. This would mean that the prosecution would have to have more evidence on hand for individual cases -- another reason more legal personnel were required.
Date:
1946CE Dec 6th
Subject:
Defendants - Charges Against 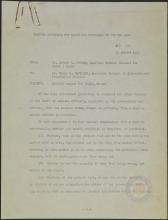 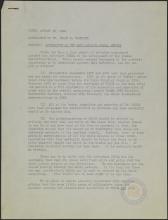 Contributors:
Frank Stacy Tavenner
Hugh Barnett Helm
Description:
Discusses the evidence against OKAWA, including specific prosecution documents, books, pamphlets and speeches, and interrogations. States "there can be no doubt that the defendant OKAWA was the sparkplug that kept the whole conspiracy alive and going over the whole period covered in the Indictment." Mentions HASHIMOTO, the killing of Chang-Tso-Lin, the March 1931 Incident, the Mukden Incident, the Blood Brotherhood Assassinations, the assassination of General NAGATO, the Tokyo Army Rebellion, the China Incident, the Greater East Asia war, Konosuke SHIMIZU, Tokugawa TOSHICHIKA, ARAKI, MASAKI, the TOKUGAWA diaries, the Yamato Club, KOISO, SHIRATORI, and other defendants. Closes by writing "I feel that the greatest weakness in the case as a whole is the lack of connection shown between the defendants in regard to the conspiracy. This defect must be overcome to sustain the charge of conspiracy. Otherwise, the case will have to be won on the conspiracy with Germany, the Pearl Harbor attack, and inhuman treatment of prisoners of war. For this case to "peter out" in such a manner would be little short of disgraceful as atrocities in regard to prisoners of war could very easily have been handled by Colonel Carpenter's section; the rest could have been lumped into the Pearl Harbor trial which would have been very much simpler and very much shorter from the standpoint of investigation and preparation as well as trial."
Date:
1946CE Aug 28th
Subject:
Defendants - Charges Against