Description:
Reports on the detention of 110 suspected Japanese war criminals, including "Gen. Takeji Washi, former chief of staff of Japanese general headquarters." Also detained in China was Gen. Eugene Ott, "Nazi ambassador to Tokyo at the time of Pearl Harbor." Other news items report on the rush by Japanese business men to form a "league for safeguarding the emperor" and the progress of plans to purge ultra-nationalists from public office.
Subject:
Press - Post-War
Press - Response to Trial
Japanese-German Relations
Japanese Nationalism / Nationalistic Societies
Japan - Economic Situation 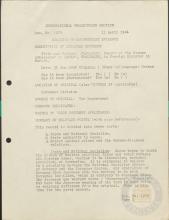 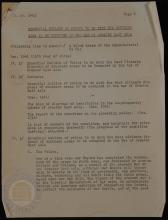 Description:
Document number 1463. Contains an outline and summary of a translation of the "policy to do with the Southern Area to be Occupied in the War of Greater East Asia." Starts in December 1941.
Subject:
Japanese Nationalism / Nationalistic Societies

Description:
Document giving an overview of the long history and development of Japanese nationalism. The analysis is "based primarily on official police records and on the court records of the coup d'etat trials of the thirties." Ties together the religious, political and social contexts of Japanese nationalism.
Date:
1946CE
Subject:
Japanese Nationalism / Nationalistic Societies 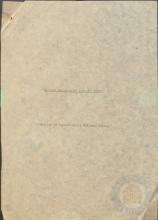 Description:
From the Cabinet Decision of July 26, 1940. Discusses the need for a New World Order based on the "lofty ideal of Hakko Ishiu on which the Empire is founded." Also states "In the light of the new external and internal circumstances of the Empire, we will so amplify armaments as to ensure the execution of national policy on the basis of a state structure for national defense through manifestation of the nation's total strength."
Subject:
Japanese Nationalism / Nationalistic Societies 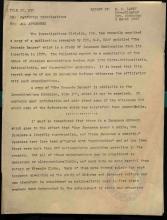 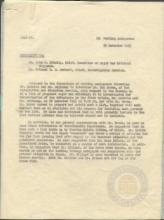 Contributors:
Solis Horwitz
Worth E. McKinney
John W. Fihelly
B. Edwin Sackett
Description:
Report on the interview with Don Brown of the Information and Education Section "with respect to the drawing up of a list of proposed major war criminals to be investigated for determination of the defendants in the first trials." Includes Brown's suggestion that the team also consult with Charles Nelson Spinks, Russ Brines and Mr. Gilland all associated with the press. Other suggestions included Mr. Yukio Ozaki a leading critic of Japan's militaristic policy and the senior member of the Japanese Diet. Other items discussed as well.
Date:
1945CE Dec 19th
Subject:
Japanese Nationalism / Nationalistic Societies