Description:
Reports on the testimony by a contemporary of Shumei Okawa regarding an attempted coup in March and the later Mukden incident. References ultra-nationalist societies.
Subject:
Press - Response to Trial
Defendants - Charges Against
Mukden Incident
Witnesses

Contributors:
Roland A. Martone
Description:
Reports on the prosecution's witness testimony of John B. Powell who stated that Mamoru Shigemitsu "did 'all he could' to restore peace in Shanghai after the outbreak of hostilities there in 1932." Powell also recounted the movements of the Chinese 19th Route Army around Shanghai after the Manchurian Incident. This was the second day of Powell's testimony for the prosecution's "All China Military Aggression Phase." On the first day he discussed the treatment of prisoners of war by the Japanese army.
Subject:
Witnesses
Testimony
Japanese Aggression in Manchuria
Japanese Military
Prisoners of War (POWs)
Press - Response to Trial

Description:
Reports on the testimony of Yukitoki Takikawa and Hyoe Ouchi regarding graduation requirements for Kyoto Imperial University (including mandatory military training and lectures). They offered insight into the military training that accompanied the school's curriculum. Also recounts how the cross-examination of Ouchi progressed.
Subject:
Witnesses
Testimony
Press - Response to Trial
Japanese Military 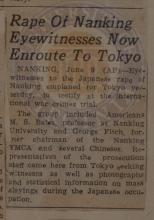 Contributors:
Earnest Hoberecht
Description:
Reports that former Secretary of State Cordell Hull and Chinese Communist General Choux En-laic "may be asked to appear before the International Military Tribunal for the Far East as defense witnesses for ex-Premier Hideki Tojo and the 26 other class A war criminal suspects." Other rumors circulating at the tribunal suggest that Republican Senators Owen Browser and Homer Ferguson might be subpoenaed in relation to their work on the Pearl Harbor Investigating Committee.
Subject:
Witnesses
Press - Response to Trial
Pearl Harbor 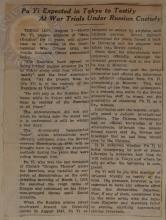 Description:
Reports that Pu Yi, Japanese puppet ruler of Manchuria for 11 years, will testify before the International Military Tribunal for the Far East. States that Pu Yi will remain in Russian custody at all times. Gives a brief background of Pu Yi's rule in Manchuria and states that his whereabouts have been unknown since Russia overran Manchuria in 1945.
Subject:
Testimony
Witnesses
Press - Response to Trial
Japanese Aggression in Manchuria
US - Russian Interactions 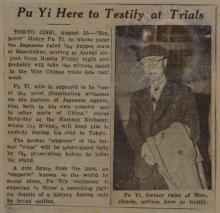 Description:
Reports on the arrival of Henry Pu Yi, Japanese puppet ruler of Manchuria, at the Atsugi airport. He flew in from Russia (where was being held in custody) and was expected to testify sometime late in the following week before the tribunal. The article concluded that "Pu Yi's testimony is expected to throw a searching light on details of a history known only by broad outline."
Subject:
Testimony
Witnesses
Press - Response to Trial
Japanese Aggression in Manchuria