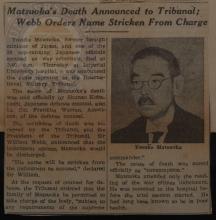 Description:
Reports on the death of Yosuke Matsuoka, one of the Japanese accused war criminals on trial before the International Military Tribunal for the Far East. The official cause of death was listed as "consumption."
Subject:
Trial Progress
Press - Response to Trial
Defendants - Charges Against

Description:
Gives a status update on Dr. Shumei Okawa and quotes Dr. Nishimura as saying that he believed Okawa might recover a little but that "I doubt whether he could recover completely to be able to attend the International Tribunal again."
Date:
1946CE Jul 1st
Subject:
Trial Progress
Press - Response to Trial 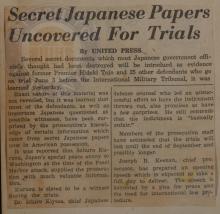 Description:
Reports on the entering into evidence of "several secret documents which most Japanese government officials thought had been destroyed." Also reports that Saburo Kurusu, "Japan's special peace envoy to Washington as the time of the Pearl Harbor attack, supplied the prosecution with much valuable information." The article ends with an announcement that Joseph B. Keenan has been preparing the prosecution's opening statement and that it was likely to take a full trial day to present to the tribunal.
Subject:
Trial Progress
Evidence